Some thoughts that I have to diary-ize today.
I have been feeling very guilty recently, about all the things that I should have done with Allison while I still had a chance. I really should have MADE more time, but often I was tied up here with customers visiting. And if customers don't visit, then our mortgage don't get paid and we don't eat. So i did need to do it. She started to deteriorate in September and didn't really want to see visitors. So I really just waited for an invitation, or we caught up when MIL invited me and the boys over for dinner.
Its a shame that she had spent the past 8+ years in the UK. She did come home for holidays like 2-3 weeks at a time. But really I only got to know her over the past year, the year when she finally came home from her OE - but not to settle down, just to die.

Prior to September we had great times together. Shopping (quick mission trips) opshopping at my favourite spots to help her furnish her flat in West Tamaki, trips to the park, trips to Royal Oak mall for icecream, playing tennis on her Wii thing, trips to the emporium place that she showed me to get art supplies. She had promised to do a painting for Lochies room..... when Bruce was tidying up her flat he brought me back the canvas and paints - so she still owes me that painting! One canvas she had started. Its been painted navy blue and has spots on it. I have no idea what she was going to turn it into. She was an artist. My inlaws have lots of her paintings in their home.

My hubby visited her alot. In the evenings when my boys were in bed. On the days that I knew he was going to visit La I would quickly take some photos of the boys, and just print them out on my computer. It wasn't until after she died that I have learnt how much she valued these. 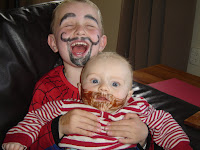 When we spent time together, her and me, and my boys - we never ever mentioned the cancer. I tried to just treat her normally, but all the time it was always at the back of my mind. I am glad that I wrote her the letter, to tell her that I loved her and that I would miss her. That is the best thing that I have done for her in this whole thing.

And there were all those times when I was trying to take photos, trying hard to make it not look like I was obviously taking photos, for us to treasure after she had passed. I felt like a dick when I was doing this. But most of these were the photos that we had on display after her funeral.

She gave the best presents too. Usually cool robot clothes from H&M in the UK. For Angus's 3rd birthday she knew that he was a big Dora fan, so she organised heaps of Dora gifts from a NZ website. She insisted that they wrap it in blue for a boy, when the shop keeper was going to do it all in Pink. I'm glad that she was not a gender-specific gift giver.

She got Angus a cool robot shirt for Christmas last year. White with tiny robots on it. I had tried to get him to wear it on several occasions over the past year, but he never would. I think it was because it had long sleeves and buttons on the sleeves. On the day of her funeral I got it out, and he happily put it on. Weird that it was only on that day. She would have liked it, he was pretty spunky.

I don't know yet if I will dress Lochie in the hand-me downs from Angus, from Aunty La's gifts. We might just keep them special.

I cant believe that this really happened. It feels like it has happened to some one else. Was it really our family?

Posted by Breastmates at 8:26 AM 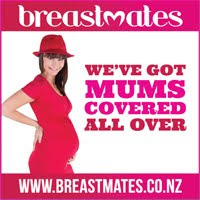